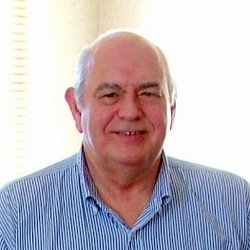 Although I won a place to Tavistock Grammar School, and later Plympton Grammar School, I left school at sixteen with no qualifications because I wanted money in my pocket. After serving in the Royal Air Force I tried a number of occupations, including running my own business. I made a lot of money and lost a lot of money.
I started writing in my late forties, albeit these were pantomimes, plays and murder mystery scripts for the stage. My first book, “Memories of Childhood”, which, as the title suggests, was about my early life, was published in 2006. This proved so popular that it was followed in 2008 by “The Book of Shaugh Parish”, an anthology of stories provided by the people who had lived in the area. My latest book, “101 Forgotten Gadgets” published in 2016 evolved from my regular articles “Grandma’s Gadgets” which, as I’ve already said, have appeared in my local newspaper for the last 6 years. The book features over a hundred objects featured in those articles.

The only equipment I need is a 6 – 8 foot table and about 10 minutes to set up.
I have presented my “Forgotten Gadgets talk/quiz to all types of organisations including Rotary, Probus, Towns Women’s Guild, WI, U3A, 41 Club, Local History Societies, antique collectors groups and Senior Citizens Groups. I have been invited back to speak again year after year by many of them. (I change my collection annually). The events have also included after-dinner engagements and charity fund raising events.

I charge £1.50 per head for each member of the audience with a minimum charge of £40.00 and a maximum of £60.00. Mileage is charged if the venue is over 15 miles from Abergavenny.
Willing to travel to Herefordshire, Blaenau Gwent, Caerphilly, Monmouthshire, Newport, Torfaen, Cardiff, Merthyr Tydfil. 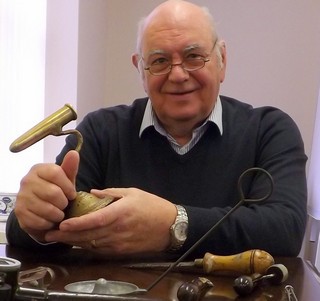 “Forgotten Gadgets” is an interactive talk/quiz that will baffle, amuse, enlighten and thoroughly entertain the audience. It is a unique presentation that has evolved from my regular articles “Grandma’s Gadgets” which have appeared in the local newspaper for the last 6 years. The only equipment I need is a 6 – 8 foot table and about 10 minutes to set up.

The first thing you should know is that my presentation is very interactive and there is usually lots of laughter so nobody ever, ever falls asleep!

I come along to your meeting with twenty or so unusual and not readily recognisable objects. After my introduction I split the audience into teams of up to six people. Each team is supplied with an answer sheet. I then spend approximately 15 minutes running through the objects giving clues as to their ages and origins.

This is followed by a 10-minute break in which the audience is invited to pick up and inspect the objects on the table and write down what their team think they were used for.

I spend the next 30 minutes or so asking the audience for their ideas before explaining what they actually are and where they originated. This section can get quite hilarious because sometimes the suggestions are outrageous. Finally, the team with the most correct answers are given a clap.

The whole thing normally lasts about an hour but sometimes runs on if the audience has lots of questions.

Leave a review or testimonial for Don Balkwill

Leave a review for Don Balkwill

Send a message to Don Balkwill