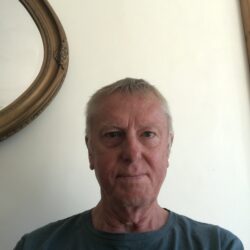 I was a Family Doctor in Dorset for 38 years and worked for another 10 in GP and Hospitals. I was a GP Trainer for 30 years. I have also been a member of the Richard III society since 1979 and the American Civil War Round Table (UK) since 1990
I have travelled to the US extensively and became absorbed in its history.

I do three talks of which ‘Alcohol Considered’ is easily the most popular. On one hand the department of health treats alcohol as though it is a Mercury compound and on the other their is a huge colossal world wide drinks industry. The truth has got to be somewhere in between and reveals a lot of hidden information and exposes the UK as the world’s nanny state.
‘250 years of fighting the Americans’ is another talk. Behind the special relationship is in fact an uneasy relationship. We have been to war with the US three times and on the edge even more. The US came into WW1 to help the French not us. They were forced into WW2 by Japan after bleeding us as far as they could. And yet there are close military ties.
‘Richard III and his mother’ is another talk I created to balance the dreadful trashing of his reputation by Shakespeare. Richard’s mother Cecile Neville was a remarkable woman. A great beauty, married at twelve to the Duke of York, she had the first of her 13 children at twenty four. She outlived her four sons, two of which became kings and died age 80. Richard was a good law maker, a good military commander, a loyal brother and a man to go to when needed.

The department of Health says there is no safe level of alcohol. You can say that about mercury compounds, or strychnine or cyanide, but alcohol! There is a huge world wide drinks industry. Buckingham Palaces has its own gin! There has to be a compromise view. Hence this talk. I will introduce you to the J shaped curve, the nonsense of our Units and how they are different to the rest of the world in number and quality. I will demonstrate the three medicinal qualities on alcohol which probably make it the best daily drug ever and the reason moderate drinkers live longer than non- drinkers. I will expose the bent statistics that vilify alcohol. I will not ignore the harmful effects but put them in perspective.
This has been a very popular talk but is quite serious in its nature.

250 years of fighting the Americans

Most people know of the War of Independence in which the 13 colonies chose a democratic republic tempered by the rule of law over monarchy. But they are not aware of the false narrative which made Great Britain the bogey man to the US. They will not be aware of the war of 1812-14 let alone the pig war of 1859. They might be aware of the American Civil War but not be aware that most of that time GB and the US were on the brink of war and after the war ended GB paid the US huge reparations. GB seized the North Atlantic trade following the war but as US GDP passed that of GB the US plotted our financial downfall completed by two world wars. In neither event did the US enter the wars to help us.
I explore the love hate relationship the US has with GB/UK because of common ancestry, common language and similar humour and music.

Richard III and his mother

Such is the trashing of Richard’s reputation by Shakespeare I thought I would attenuate it with an account of his mother. She was Cicely Neville, the rose of Raby, a great beauty and hugely wealthy. It makes him real whereas Shakespeare’s Richard is a tragic comic monster. Richard saw his mother assaulted, possibly raped when he was 7 and his father and brother killed when he was 8. Their heads were put on spikes at Micklegate, York. His mother had 13 children of which several died young. She was married to the Duke of York at 12 and had her first child when 24. She died when she was 80 having seen her four boys die, two of which were kings. The relationship between Richard and his mother must have been close from the letters written and her advice sought. Richard was a good law maker, good soldier and good administrator. He was the man to go to when the task was beyond others.
I hope to humanise Richard and give the respect to his mother which she deserves.

Leave a review or testimonial for Charles Rees

Leave a review for Charles Rees

Send a message to Charles Rees