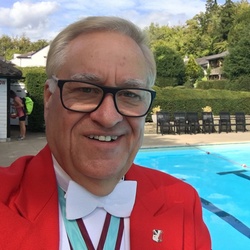 Neil has appeared on television in his famous red tailcoat and has been a guest on several radio stations, including LBC where he was interviewed by Sandi Tocsvig. Incidentally, Neil also appeared in the ‘Toastmaster’s Team’ on BBC’s Eggheads (but don’t ask him the result).

Neil is a Stand Alone speaker.

My fee is negotiable, please contact me to discuss

Tales From the Top Table 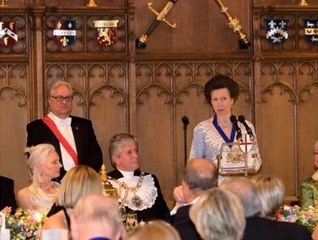 Neil brings the talk to life by wearing full uniform as he takes you on an interesting journey in to the mysterious world of the professional Toastmaster, with some humorous anecdotes on the way.  He touches on history, protocol and titles, and explains the various aspects of a large function with VIP’s present.

In addition to introducing hundreds of nervous Bridegrooms, Neil has officiated in the presence of Royalty, Prime Ministers and Diplomats.  Lord Mayors, Celebrities and Captains of Industry, and has worked in some of finest venues, including: London’s Mansion House, Savoy and Dorchester, Grosvenor House, Guildhall and the Tower of London.  Not to mention venues on mainland Europe, New York and an event aboard the liner Queen Mary 2. 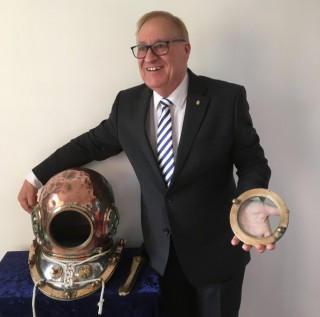 Neil Hunt is a Former Diving Superintendent. His friendly and entertaining manner brings the realities of a dangerous profession to life. He paints a vivid and sometimes humorous picture of his experiences as a working diver in the 1970’s and 80’s. He relates stories of ‘black-water’ work in the River Thames, major port-construction in the Middle East, and arduous work beneath the huge offshore oil installations in the notorious North Sea.

Neil’s maximum working depth was 193 feet and during his career he used many different types of equipment, however, he is particularly proud to have been one of the last traditional hard-hat divers in the business.
Incidentally, for this talk he brings with him a traditional Standard Diver’s helmet and demonstrates the working parts to enhance the audience experience.
Neil’s last involvement with the industry was in 1987, when he was employed as Diving Superintendent during construction of the Queen Elizabeth 2nd Bridge at Dartford.

Leave a review or testimonial for Neil Hunt

Leave a review for Neil Hunt

Send a message to Neil Hunt