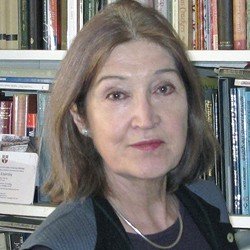 I am a freelance photographer, author and lecturer, and have worked between London and Venice for many years to create a photographic archive of Venetian art, architecture and daily life. During the 1980s I worked in the British film industry as the stills photographer on a number of feature films, including Wagner, Nineteen Eighty-Four, White Mischief, and A Room with a View. My illustrated book Ruskin’s Venice: the Stones Revisited was published in 2000, followed in 2015 by a new and extended edition, which has recently been translated into Italian.

The lectures that I give in the UK and in Italy are mainly on Venetian subjects; on John Ruskin’s work in Venice, and on film and photography. Talks are given for various arts societies, museums and organisations, including the Ashmolean Museum, Oxford; the British-Italian Society, London; the British Institute, Florence; the National Gallery, London; the Royal Collection; the Victoria & Albert Museum, and the Wallace Collection, London. I am a trustee of the Venice in Peril Fund, the British Committee for the Preservation of Venice.

All talks are fully illustrated with images on PowerPoint, and usually last 50 minutes, to allow time for questions.  Longer lectures can be given if an interval is needed.  A projector, screen and lectern are requested, and a laptop can be brought, if necessary. The PowerPoint presentation is supplied on a memory stick, and can also be emailed in advance of the lecture.

The starting figure is £200, plus travel expenses, which may involve train fares if travelling out of London.  I am ready to travel anywhere within the UK or Europe, and will lecture at short notice where possible.

The Changing Face of Venice 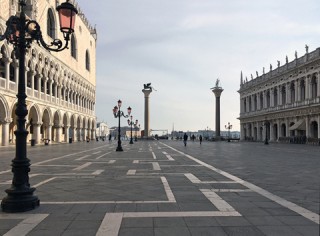 In our imagination Venice is unchanging, but the modern world is leaving its mark. This talk will illustrate some of the many changes that have taken place in the lagoon city over the last century. Certain developments, such as the restoration of damaged buildings, are to the city’s benefit; but a massive increase in tourism has caused many problems. The recent coronavirus lockdown, resulting in clean canal water and a resurgence of marine life in the lagoon, has been a timely reminder of the importance of protecting Venice’s fragile environment.

Vice and Virtue: the Capitals of the Ducal Palace, Venice 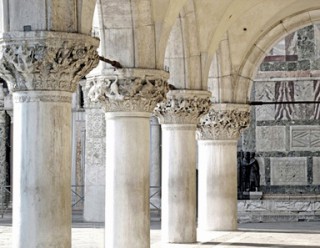 From the seven deadly sins to the cardinal virtues; from emperors, warriors and musicians to barbers, carpenters and goldsmiths, the superb medieval carved capitals crowning the columns of the Ducal Palace teem with life, variety and humour.  Ranging from mythical or religious themes to animals, birds and the natural world, they form a fascinating visual sequence, which was intended to be read like a book by the passing observer. Their history is told in this illustrated lecture. 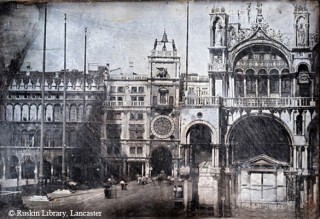 An enthusiast for early photography, John Ruskin bought a Daguerreotype camera to record details of Venetian buildings while he was researching The Stones of Venice. The images are unique records of the architecture and sculpture of Venice in the early 1950s. Several of these historic photographs, long presumed lost, were discovered at auction in 2006, perfectly preserved, and will be illustrated during this talk.

A Room with a View: Filming in Florence with Merchant Ivory 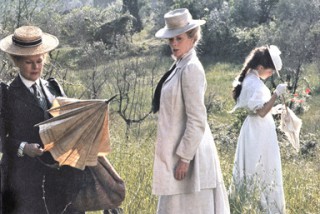 In 1985, the film director James Ivory, producer Ismail Merchant, and scriptwriter Ruth P. Jhabvala adapted E.M. Forster’s 1908 novel, A Room with a View, into a successful feature film. Set in Florence and in Kent, Forster’s comedy of Edwardian morals and manners explored themes that he would develop in later novels. Sarah Quill worked as the stills photographer throughout the film, and her talk will illustrate the experiences of the cast and crew in Italy and England, the background to the film and the lasting appeal of Forster’s novel. 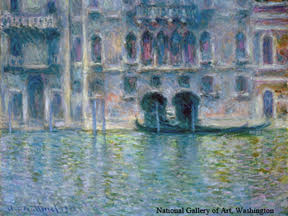 Claude Monet’s only visit to Venice, in the autumn of 1908, was made late in his life, and it was to be his last working trip abroad. He had never planned to visit the city, believing that it had been painted by far too many artists and that there would be nothing new to record. But as soon as he arrived he began to paint, and his intensive work there resulted in a series of pictures that were exhibited in Paris in 1912 and are among the best known of his art works.

A Venetian Bestiary: Birds and Beasts in marble, bronze and mosaic 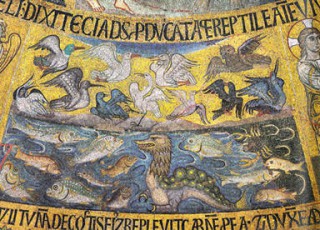 The Venetian love of animals and birds, both real and fantastical, is vividly reflected in Venice’s mosaics, sculpture and painting. The mosaic of the Creation on the Genesis Dome in St Mark’s is one of the great wonders of the world. Birds, beasts and mythical creatures carved in stone are to be seen throughout the city, decorating houses, and palaces, arches and garden walls. Dominating all the creatures is the Lion of St Mark, which can be found in various forms and guises wherever you walk.

“Infinite Variety”: John Ruskin and the Capitals of the Ducal Palace 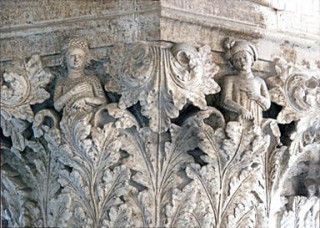 The superb medieval carvings crowning the columns of the Ducal Palace in Venice have survived fire and flood over the centuries. They represent myriad aspects of life, love, labour, mythology and faith, and were regarded as a mirror of the universe by the people who walked past them and read them like a book. This illustrated talk will describe their story and Ruskin’s engagement with them in The Stones of Venice.

“As it was, and where it was” – the fall and rise of the Venice Campanile 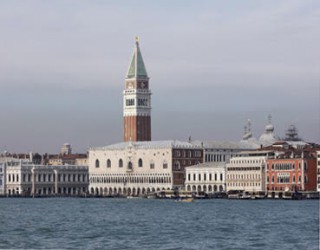 In July 1902 the famous bell-tower of St Mark, the city’s totemic symbol, collapsed into a pile of rubble, crushing Sansovino’s 16th-century Loggetta beneath it and narrowly missing the slender columns of the Basilica.  News of the disaster flashed by telegram round the world, and the shock and distress felt by Venetians at the sudden loss of their landmark bell-tower was intense. After an immediate decision by the town council that the Campanile would be rebuilt exactly as it was and where it was, the work of recovery, planning and rebuilding took ten years. The story is told in this illustrated lecture.

The Venice in Peril Fund and its history 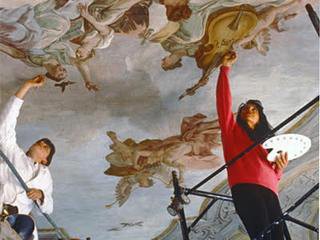 The Venice in Peril Fund, the British committee for the preservation of Venice, is approaching its 50th anniversary. The charity was founded in 1971 in response to the terrible damage caused by the 1966 floods in Florence and Venice; and over the years it has continued to raise funds to restore and conserve Venetian art and architecture. This talk will describe the Fund’s history and activities, and will illustrate some of its many Venetian projects.

Leave a review or testimonial for Sarah Quill

Leave a review for Sarah Quill

Send a message to Sarah Quill