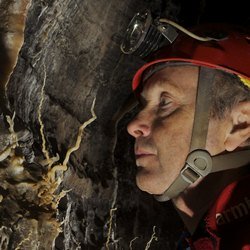 I’ve been a caver for almost thirty years and have explored most of the major caving systems in this country. As well as being a member of Dudley Caving Club, I am also a member of the Midlands Cave Rescue Organisation and have been a volunteer in a number of cave rescue incidents. In 2002 I was awarded the Queen’s Golden Jubilee Medal and in 2012 the Queen’s Diamond Jubilee Medal for services to cave rescue.

I supply all necessary equipment to present my talk except a screen (or a friendly wall) and a table.

The talk usually lasts about 50 minutes but can be made longer or shorter, or tailored to meet the needs of the audience. For example, for local audiences I include a section on the Dudley Limestone Mines. There are also modules on cave development, caving techniques, equipment and rescue all illustrated with video clip and anecdotes.

My fee is £60 plus travelling expenses at 40p per mile when more than 10 miles from my home in Bromsgrove, Worcestershire. I am willing to travel up to 80 miles from Bromsgrove or possibly further by negotiation.

Caves and Potholes of Great Britain 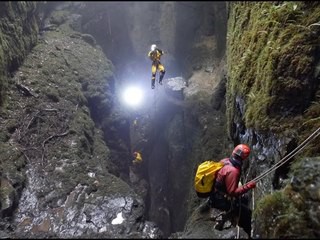 The underground world is full of excitement but can also be dangerous for the unwary and inexperienced. Adventures abound and there is fun to be had. Abseiling down Britain’s deepest natural underground cavity, Titan in Derbyshire, at 450 feet deep (as tall as the London Eye) is the ultimate adrenaline rush and there it is a fantastic feeling knowing that very few people ever go to the places and see the sights that cavers are privileged to witness.
I have attempted to capture some of this excitement, danger and fun on video. The tag line for many of these videos is, “Remember we do these caves so that you don’t have to.” As well as showing a number of clips from my videos the talk will also be illustrated with photographs from Brendan Marris and Mark Burkey who are both award winning underground photographers and fellow members of Dudley Caving Club.
The talk lasts approximately 50 minutes.

What people say about my talk

In October we had a brilliant 5 Star Session with Keith Edwards – ‘Underground Delights’. Keith had gallantly, if nervously, come to Sheila’s rescue, when a colleague could not meet the date. He expertly guided us through the labyrinthine world of caving, with all its mystery and danger. We began to understand that what drives people to clamber down swaying ladders, with only a head lamp for illumination; squeeze themselves through the smallest, narrowest spaces and to dive deep into underground lakes, was that this to them is FUN! We could see that it might be.

The camaraderie among cavers was much in evidence not only in the slides and video clips but also in Keith’s amusing commentary. If you’ve a mind to see these wonderful rock formations hidden below ground and this seems like your idea of fun, Dudley Caving Club are your people. This brilliant talk was Keith’s first! We’re sure it won’t be the last.
Praise from Sandwell U3A

Keith Edwards visited us in June (2016) and told us all about his life as a member of Dudley Caving Club and also about the history of the club when it was originally called Dudley Cave Rescue Team. Keith has won numerous awards for his film work and he showed us lots of photographs and short films of places they have explored and also told us about several rescue operations they have been involved in. Keith’s presentation was very interesting and humorous and enjoyed by all of our members. However, unfortunately he didn’t get any new recruits from our members – better luck next time!!!! Excellent.

Leave a review or testimonial for Keith Edwards

Leave a review for Keith Edwards

Send a message to Keith Edwards