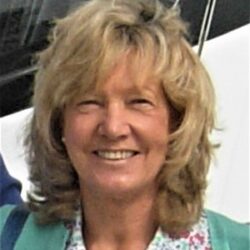 Sally Smith is a journalist and writer who has worked for various publications and media, including the Daily Mail and BBC News. She was named Business Writer of the Year, has a Churchill Fellowship and has had books published by Pelham Books, Rigby Books and the History Press.
Sally has also spent a lifetime involved in travel, unconventional sports and in various areas of aviation. A hugely experienced skydiver, she started and ran the world’s first ever all girl parachute display team; was British freefall champion and member of the British Parachute Team. She is also an experienced balloonist, ran a hot air ballooning school for many years; was a commercial balloon pilot, was a member of the Australian Ballooning Team and was second overall female at the World Ballooning Championships.

Sally’s talk is informal and friendly, but bursting with information and enthusiasm about a subject she knows so well! It is all about the part British women have played in the development of aviation, based around the characters and adventures of the women featured in her latest book Magnificent Women and Flying Machines (see below). Her talk is geared for everyone rather than just aviation enthusiasts, and is backed up throughout by pictures and photographs; she brings with her a projector and self supporting screen. Ideally, Sally prefers daytime rather than evening events, and her talk lasts about an hour. 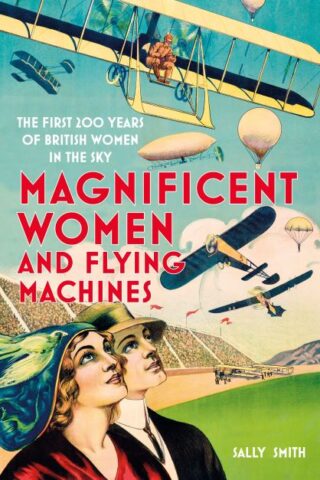 Sally’s talk is about her latest book, Magnificent Women and Flying Machines, published by The History Press.. The book covers the first 200 years of British women in flight, telling the personal stories of the amazing women who were real pioneers in all forms of aviation, from ballooning, parachuting, gliding, airships and fixed wing flight right up to the story of Britain’s first ever woman in space. Sally’s talk gives an entertaining insight into the lives of these amazing women. Some of the stories are poignant, such as the story of Britain’s first ever female parachutist who was brought up in a Victorian workhouse; some are very entertaining, such as Britain’s first ever balloon pilot who had almost more crashes than successful flights and the two Lady Mary’s, who were flying biplanes across Africa in the 1920s which ended up in sarcastic rivalry when they met in Khartoum. Plus of course Amy Johnson, who got lost on her first cross country flight but finally managed to find Australia! The talk offers fascinating insights into the characters and lifestyles of these wonderful women and also offers fascinating glimpses into how society has changed, right up to Britain’s first ever woman into space and how living in a small space capsule with a group of Russian men was thought to be quite acceptable! The talk is based around historic slides and overall gives a mass of new information as well as fun snapshots for all audiences.

Leave a review or testimonial for Sally Smith

Leave a review for Sally Smith

Send a message to Sally Smith